The ABC Hate-Propaganda-Station FORCED to report DT's Lawsuit....17 states back Trump in Supreme Court Action Lawsuit to pursue JUSTICE for the people

The cat is out of the bag. News of the corruption and coup attempt are everywhere among the sheeple. Hannitty, Lou Dobbs,etc.etc. Next the Globalists/ Left will push the card table over and begin shooting. The bad guys' gang (China,Deep State) are waiting outside the saloon door.
Ron
On Thu, Dec 10, 2020, 11:wrote:

The original reporting tonight was so full of hysteria, RAGE, Anger that it was unfit for the worldwide internet, so they re-made a "soft version" for online.
I knew they would do that.
I hope some of you saw the original 'Western addition' [version] on TV. Embarrassing ! 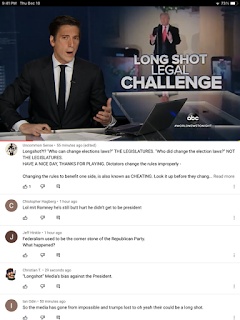 Lothar
Sent from my iPad
antiwar.com