your health, blood type vs Coronavirus

Fake news media has difficulty with any factual statistics.
Humorous mistakes.
Clumsy presentation of numbers
The text often disagrees with the numbers presented from original sources.
Scarf Lady Birx has at least twice referred to an exponential curve as a logarithmic curve which are opposites!
Pandemic models are apparently all wrong
and funded by taxpayers who suffer the results of fake science.
Sheeple forced to pay for their own disinformation.
Blood type varies markedly by country,
may be why some countries are more vulnerable to coronavirus.
I am O+ blood type.
O least impacted by coronavirus
Native Americans are exclusively O
O is also the most common in Ireland, Mexico, Peru, Chile,… and many countries.
A is more common in Iran, Italy, Korea, Japan, many European countries Hit hard by coronavirus.
People with Type A blood are MORE likely to catch coronavirus than those with Type O
In Wuhan Type O blood 34% is more common than A 32%
But in the infected
Type O just 25%
while Type A was 41% type A blood,  41 per cent of all deaths.
Type O 25% of all deaths compared to 32 per cent of all people are type O.
All infections are 26 per cent and 38 per cent for type O and type A,
Older people remain most at risk of dying
Men seem to be faring worse than women.it's becoming more clear that how healthy you were before the pandemic began plays a key role in how you fare regardless of how old you are.The majority of people who get COVID-19 have mild or moderate symptoms. NOT JUST THE OLD WHO GET SICK80% of deaths were among people in their 60s or older Italy has the world's second oldest population after Japan.
Italy has reported more than 80% of deaths so far were among those 70 or older.10% to 15% of people under 50 have moderate to severe infectionEven if they survive the middle-aged can spend weeks in the hospital.
In France more than half of the first 300 people admitted to intensive care units were under 60."Young people are not invincible,"
Italy reported that a quarter of its cases so far were among people ages 19 to 50.
In Spain, a third are under age 44.
In the U.S. 29% were ages 20 to 44. children have made up a small fraction of the world's case counts
most appear only mildly ill, role kids have in spreading the virus
Underlying health plays a big role.
In China, 40% of people who required critical care had other chronic health problems.
deaths were highest among people who had heart disease, diabetes or chronic lung diseases before they got COVID-19. Preexisting health problems also can increase risk of infection,
such as people who have weak immune systems including from cancer treatment.
Italy reported that of the first nine people younger than 40 who died of COVID-19,
seven had "grave pathologies" The more health problems, the worse they fare.
Italy also reports about half of people who died with COVID-19 had three or more underlying conditions,
while just 2% of deaths were in people with no preexisting ailments.those most at risk have significant cardiovascular diseases such as congestive heart failure or severely stiffened and clogged arteriesAny sort of infection tends to make diabetes harder to control,
diabetics appear to be at particular risk with COVID-19.Risks in the less healthy may have something to do with how they hold up if their immune systems overreact to the virus.
Patients who die often seemed to have been improving after a week or so only to suddenly deteriorate
— experiencing organ-damaging inflammation.preexisting lung problems, in people who have less lung capacity
COPD
cystic fibrosis.
Asthma
routine respiratory infections
prior bout of pneumonia Unless it was severe enough to put you on a ventilator, shouldn't have caused any significant lingering damage
GENDER imbalance
During previous outbreaks of SARS and MERS men more susceptible than women.
more than half the COVID-19 deaths in China were among men.
Other parts of Asia saw similar numbers.
Italy men so far make up 58% of infectionsBritish patients admitted to critical care  two-thirds were male.Globally, men are more likely to have smoked more heavily and for longer periods than women.
Hormones may play a role, too.
Iowa researchers infected mice with SARS and males were more likely to die.
Estrogen seemed protective
— when their ovaries were removed,
deaths among female mice jumped___
All major ABO blood alleles are found in most populations worldwide,
Native Americans are nearly exclusively in the O group.
Results revealed no significant differences among Mesoamerican and South American groups,
but showed significant differences within population groups
genetic drift and founder effects throughout the American continent.
Interestingly, in all American populations, the same set of haplotypes O(1), O(1v), and O(1v(G542A)) was present,
suggesting:
(1) that they constitute the main genetic pool of the founding population of the Americas and
(2) that they derive from the same ancestral source, partially supporting the single founding population hypothesis.
knowledge of the peopling of the Americas
the G542A mutation emerged in Beringia,
probably during the differentiation process of Asian lineages
that gave rise to the founding population of the continent.
autosomal DNA from ancient Native American skeletal remains
can be used to investigate the low level of ABO blood group diversity in the Americas.
Extant Native Americans exhibit a high frequency of blood type O,
which may reflect a founder effect,
genetic drift associated with the historical population decline,
or natural selection in response to the smallpox epidemics that occurred following European contact. 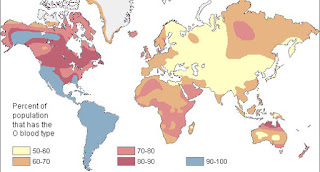