Smithfield is a Communist China operation
Yellow boss whipping illegal imported confined Latino Slaves on stolen Native American land,
slicing and dicing and grinding,
pig-killer,
cow-killer,
chicken-killer  the biggest killer operation? cheapest protein is chicken?
CAFO confined animal feeding (killing) fed GMO corn soy,… drugs, hormones,….
Tyson, Cargill, etc.Study size, ownership, employment, health impacts of CAFOPolitical influence, antibiotics, superbugs, hormones, making the rich richer and poor poorer and sicker.
Buy the best meat if you consume meat but probably you are better off without it.
Vegetarian most of my life, and often very slender and light.
Good for extreme sports, speed, strength, endurance.
I was about the skinniest person in the gym when it closed a few weeks ago.
1997 April I suddenly started daily protein boost by beef - Black Angus -
big slab of London Broil while biking uphill daily Lake Tahoe up to 8000 feet elevation.
Immediately gained 30 pounds of muscle mostly in my legs,
and 3" thick muscles along spinal column
and the previously small muscle on the outside of arms needed to keep handlebars straight.
Amazing how much muscle I can grow and how dark red I can get in bright sun high altitude showing my bison eater Sioux ancestry who were the largest and strongest people in the world when discovered.
May be growth hormones injected into beef, or creatine in beef, massive protein, etc. that causes growth.
I thought about going into sumo wrestling to make use of my newly discovered large size.
I added sugar and flour to increase size and boost blood insulin levels,
big mistake.
Turned into gout in right big toe and generally poor health 18 months later.
Black cherry juice stopped the gout.
Then I stopped beef, returned slowly back to good health.
May be time to try beef again if I can find a good source.
Without the sugar and flour.
The best beef goes to Las Vegas and New York City, fancy restaurants.
Now restaurants closed so cattle stay alive supply buildup.
I was born near Amarillo Canyon Hereford Texas where we had hamburgers often.
On formerly XIT the worlds largest cattle ranch,
Still huge herds of cattle stink to the high heaven over 5 state high plains.
Probably injected with growth hormones and slaughtered by illegals.
Texas economy getting clobbered worse than most with oil price crash, beef price crash, cotton price crash,...
May be some good real estate deals possible as people die off or go back to Mexico.
Many ghost towns back in the 1950s, small time farmers could not survive.
Huge unpopulated areas still,
very low population density,
very conservative dry counties,
Mostly republican cowboy types.
https://www.agweb.com/article/fj-live-packers-picking-fattest-cattle-help-ease-backlog
president and general manager of Consolidated Beef Producers (CBP),
Amarillo,
told  AgDay anchor
the marketing cooperative has been working to identify cattle
that are in danger of becoming over-finished
and sending them to slaughter."Packers have been good so far to work with us to try to keep those cattle marketed,
but it is a struggle with no more than they need,"
"They're having to pick just a few cattle out of each yard,
and we've just been trying to manage that and keep people's attitudes as positive as possible.
We're trying to work on ways to figure out how to determine price,
which is pretty hard right now."Bradshaw said the industry was current in marketing cattle through the end of March,
but, "now we're at least 200,000 head to 250,000 head behind where we should be,
and we expect that number to grow significantly over the next 60 days."
The actual number over the next few weeks will be determined by how quickly packing plants get back to running full speed.
Bradshaw believes the number of backlogged cattle could reach half-a-million or more.
Price discovery has become almost non-existent for fed cattle in many ways,
with packer line-speeds slowed and their demand for cattle is greatly reduced."Packers have tried to help hold (the market) up to a certain level,"
"It's tough because everybody needs (those cattle) gone
dead
slaughtered
but there really isn't much of a cash market.
It's really whatever the packer kind of determines he wants to pay."That's a harsh reality because, there's
"really no discovery right now
because there's just so few cattle that can get through the system."
An example has played out this week as
CBP sold some cattle at $100 per cwt.,
and then another string at $95.
"Typically, that would be a big price break,
but right now it's just trying to get a home for those cattle." 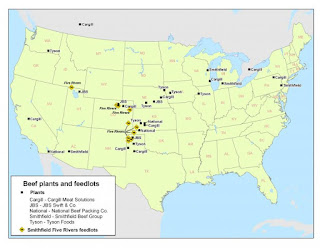