I hit the same page "Community Quarantined by Reddit."
Biden Ukraine conspiracy to get rich by controlling your votes and stealing elections.
Trump is using systems designed by conspirators to work against conspirators.
You can do that too.
Let the corrupt system destroy itself -
Use Greta Thunberg statements in left wing media about avoiding cars, planes, boats…
machines needed by conspirators to control you or kill you.
Electronics disinformation media needs coal, oil, gas, to run.
NYC big cities filled with diesel generators to run the cloud that I sat next to most of the 1970s.
Social Media is designed for Censorship, Tracking, Monitoring, Advertising….
All posts go through central "server" in the "cloud".
Central command and control center run by communists.
Erected atop the true internet.
In contrast the true internet was designed to be decentralized so if central authority broke down, people could still communicate through the internet.
No central server needed.  Still works that way.
1970s Unix had FTP "file transfer protocol" where any computer could send any file to any other computer on the internet.
Called peer to peer P2P.
I used it back then.  Then gopher came along….
1990s P2P napster let people share music, MP3, wildly popular bankrupted much music business and Tower Records, etc.
Today many ways to share any text, photo, video, podcast, etc.
Even email can do a lot.
You don't need Social Media as long as your contacts use the same software.
FTP on my Apple iMac works the same as it did back in the 1970s - very easy to use.
I still use it to build websites.
Most professionals still use ftp or some fancy modern version of it.
Go to 1und1.de and pay a few dollars per month and you can set up your own website with anything you want on it using FTP.
They help you get paid for your work but track you as do most web host companies.
NearlyFreeSpeech.net is also cheap and emphasizes privacy for controversial speech,
may cost $5 per month to stay private but probably worth it.
I need to build some more web sites due to compulsive need to build websites and to help influence the elections.
-----------
From: LotharCensorship kicked in ! (You are suppose to worship Thunberg)Violating our Rights, like in Europe ! They want to keep us manipulated, uninformed !They took the story off RT also. (Probably labeled 'hate speech') NOT ALLOWED TO READ OR WATCH.Just like Reddit....Quarantined.....restricted due to "significant issues" 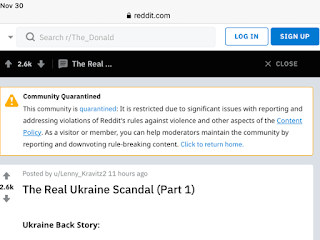 ﻿I got this message when trying to watch the video:This video is restricted from playing in your current geographic regionError Code: PLAYER_ERR_GEO_RESTRICTEDSession ID: 2019-12-01:267a2ebdc137212bb39012a9 Player Element ID:player--content-newshub-en-home-entertainment-2019-11-jeremy-clarkson-accuses-idiot-greta-thunberg-of-killing-the-car-show-jcr-content-par-videoOn Sun, Dec 1, 2019 at 6:56 AM joe wrote:Support Greta Thunberg - she arrived by sail boat that can circumnavigate the globe without using a drop of oil.Horse can travel thousands of miles without using a drop of oil.Jet Set Globalists fly by plane to organize extermination plots against you.Eliminate planes and you may survive.Jets inject pollution in the worst places in vast quantities, plane engines huge, burn lots of fuel.Cars produce massive pollution in every big city and highway.Tractors pump dirt and chemicals into the air every ag region.Electric disinformation tracking monitoring 24x365idiot box TV Radio Phone Game computer moron box imbecile boxall run on electricity, big coal.Imports of impure drugs, poisons, toxic cosmetics, clothes, furniture, building materials...Imports by huge ships burning massive amounts of fuel.Most of the plots against you can be terminated by reducing oil, coal, gas,…Electricity is another word for coal.Jesus walked or rode a donkey.Muhammed rode a camel.Genghis Kahn rode a horse.Half the USA population walked to work 50 years ago.Cars and planes were not common 100 years ago.People walked farmed hunted gathered all around the world.Human body designed for running, walking, hard work in the great outdoors.Return to traditional healthy diets and lifestyles.Amish still live that way, horses and mules.Grow their own food.Talk instead of watch idiot box.Terminate the Jet Set trajectory of the last 100 years.Keep globalists bottled up in their homeland.From: Lothar https://www.newshub.co.nz/home/entertainment/2019/11/jeremy-clarkson-accuses-idiot-greta-thunberg-of-killing-the-car-show.html