Talk to Joyce.
Sunny Arizona probably a better evacuation site with Mayo Clinic, etc.
California collapse coming but some may want to stay close to the familiar but there is not much benefit to anything out west that cannot get better elsewhere.
The problem with Oregon is bad weather — too far north.
Too much rain (oregon "ducks")
Long dark nights.
Cold wet.
Mold, colds, flu, lung damage.
Large empty areas without much money or jobs.
Bad weather drives people indoors
smoke pot impaired driving
watch TV idiot box
go nuts.
Lesbians.
Idle, lazy, welfare, ...
But some work all the time because nothing else to do.
Protestant work ethic.
Seattle booming, but homeless, expensive housing.
If you cant get a high pay job in technology you can't afford it.
Not much normal economy.
Portland is better, not so boomy, but rather expensive for what you get.
Sun deficiency causes mental and physical problems.
Huge earthquake risk,
Tsunami risk.
Beaches too cold wet and windy to use.
Only 2 months of summer that is still too cold.
Rest of the year too much cold rain, depression.
Big pacific storms rolling in.
----------------------------
Bomb cyclone shattered records as it slammed the West Coast on Tuesday, including a 106-mph gust
The storm set records for the lowest sea-level air pressure ever observed in California.
A bomb cyclone roared ashore in southwest Oregon and Northern California on Tuesday evening,
bringing powerful winds
and smashing all-time air pressure records.Marching ashore with winds clocked at hurricane force,
the storm that pounded the Pacific Coast intensified at nearly twice the rate of a "bomb cyclone."
Sustained 85 mph winds were measured Tuesday afternoon at Cape Blanco, Ore.,
with a gust to 106 mph.The extreme winds appear to have been most potent at the leading edge of a "warm seclusion."
Crescent City, Calif.,  69 mph.
Squaw Peak in Oregon 90 mph
Weed, Calif.,  70 mph
Sixes, Ore., 75 mph.
a slew of locations saw winds well above 60 mph. 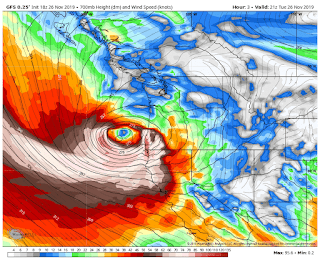