The administration has been pathetically slow on environmental as well as 2A issues. Seems to be more interested in foreign invasions, at least until now.  Many decisions are being made for him, not by him. 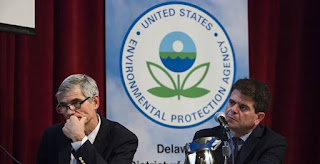 Campaign rhetoric strongly suggested that the Trump administration would redress the Obama administration's insane attempts to regulate every aspect of society in a futile attempt to control nature and climate. President Trump withdrew from the Paris Accord, initiated repeal of the Clean Power Plan, sought a reasonable replacement for the plan, and turned off the regulatory fire hose. Great start!

But two years in, it is clear that the administration has stalled on dealing with the most significant part of Obama regulatory overreach: the 2009 Endangerment Finding – the Environmental Protection Agency's declaration that plant-fertilizing carbon dioxide and other greenhouse gases in the atmosphere threaten the health and welfare of current and future generations.

While the Finding itself does not impose any new regulations, it does provide the administrative basis to justify a massive number of regulations to reduce greenhouse gas emissions. Moreover, data and facts asserted as supporting the Endangerment Finding (EF) drive many climate change studies, including the November 23, 2018 study titled Climate Change Special Report – Fourth National Climate Assessment Authoritative Report on the Science of Climate Change with a Focus on the United States.

Most unfortunate of all, while the evidentiary basis for the Endangerment Finding was subject to informal public comment and the scope of the Obama era Clean Power Plan was enjoined by a court, the studies underlying EPA's Endangerment Finding have not been subjected to outside, independent expert analysis, nor tested in the rigors of cross-examination in a court or courtroom setting.

Simply put, without independent testing of the factual claims establishing its Finding, EPA retains the power to regulate all energy-producing and energy-using activities throughout the United States – and thus to regulate our production, consumption, transportation, employment base and living standards.

Since the climate change issue could not be resolved when the Republicans controlled both houses of Congress and the White House, it is even more improbable that a divided Congress could ever reach a compromise. Even worse, while EPA talked tough on climate change in the early days of the Trump administration, it has since hung a "Do Not Disturb" sign on its front door.

So, what can citizens do in the next two years, knowing that neither Congress nor the administration will act to critically examine the supposed "facts" set forth in EPA's Endangerment Finding?

My moral code prohibits me from saying "there is nothing we can do." So I will set forth some modest proposals that can be taken up by younger people who have the energy and willingness to discover, highlight and dramatize the true facts and evolving knowledge underlying the science of climate change.

First and foremost, EPA must release all of its climate studies. It might surprise some, but many of the foundational studies have never been publicly released or are so old they are corrupted. In a similar case, amid my 20-year effort to obtain the "Six-City" health study, EPA told me in the late 1990s that the information belonged to Harvard University. A few years later, when I sought it under the Data Access law, EPA said information in the studies was developed before 2000 and the law was not retroactive. The Bush administration responded to my FOIA with documents that were so redacted that the only readable words were the "to" and "from" on the first page. And finally, the Obama administration told me the studies could not be produced because the information is now too corrupted to be usable.

But this is not about the lack of transparency in government. It is about obtaining and analyzing EPA's climate data and studies, so that the science underlying the Endangerment Finding can be tested. That means you should not pre-judge any of the studies. You must let the analysis of facts in the studies be your guide. This is essential, because otherwise environmentalist groups, the news media, left-leaning politicians and others with a stake in the 2009 Finding will paint the entire effort as an attempt to destroy the planet and human civilization.

This search for the facts is crucial since establishing the facts is essential for developing the right policies for now and for after the Trump administration is gone. If the science proves the EF is solidly supported by the evidence, we will all know that we must develop and implement the very costly policies needed for mitigation. If the facts prove the Finding is faulty or highly uncertain, then the nation could save trillions of dollars by not implementing numerous useless projects. Here are my suggestions:

1) File a Freedom of Information Act (FOIA) requesting from EPA a list of all climate studies it has undertaken and links to the electronic version of the Endangerment Finding studies. A citizen friendly EPA should be most willing to provide the list of and link to the studies.

2) Should EPA provide this list and links, scientists from around the world could review the quality of the studies by evaluating them under the standards of review set out in the OMB Information Quality Act (IQA) Guidance Document: peer review, objectivity, reproducibility and similar standards. There are likely thousands of studies, so the essential first task is to identify the most influential studies, of which there are likely only a few.

3) A similar request could be filed under the Data Access Law for studies performed after 1999.

4) For the most influential studies, request that EPA provide the underlying data so that the actual data can be tested in accordance with the IQA Guidance Document. The government paid for and owns this data, so it should be available to citizens to test its reliability, reproducibility and the peer review quality.

5) When the most influential studies are identified and the underlying data secured, hire a team of forensic data scientists to analyze the data used in EPA's studies, to determine whether the studies' authors used the data properly … or used them in ways that supported a personal bias. For the most influential studies, the forensic data team should also review the emails that relate to the government study.

7) Establish a review board of independent, non-political climate experts to determine the soundness of the facts underlying the Endangerment Finding. If the facts are sound, the matter is settled.

8) If the facts are judged not to support the EF or if they establish a high degree of uncertainty, then it is essential that a Petition for Rulemaking be presented to EPA to conform its Endangerment Finding with the data. If it is granted, then the process of getting the facts corrected will start.

9) If EPA denies the petition, the matter should be taken to federal trial court to challenge the arbitrariness of EPA's decision. Keep in mind: this crazy idea to challenge an EPA denial of a petition for rulemaking in court is exactly the process that environmental groups used to win the Massachusetts v. EPA case in the Supreme Court. Just don't forget – you need to include a few states to have standing to sue.

What is outlined is a long, long shot. It requires that EPA make government-owned scientific data available to the public for review. It assumes the Trump administration will be open to such a process and can make it happen in two years. It assumes that funds can be raised to hire the best scientists in the world to analyze the facts and defend them in court, if necessary. Finally, to paraphrase Colonel Jessup in the movie "A Few Good Men," it assumes that both sides will be prepared to handle the truth.

But at least we will all have attempted to find the truth behind the Endangerment Finding, so our country will have the best information possible on which to make some very expensive and far-reaching public policy decisions.