Mass killingsoccurred under several twentieth-century communistregimes. Death estimates vary widely, depending on the definitions of deaths included. The higher estimates of mass killings account for crimes against civilians by governments, including executions, destruction of population through man-made hunger and deaths during forced deportations, imprisonment and through forced labor. Terms used to define these killings include "mass killing", "democide", "politicide", "classicide" and a broad definition of "genocide".

Several different terms are used to describe the intentional killing of large numbers of noncombatants,[1][a][b][c][d]and, according to Professor Anton Weiss-Wendt, there is no consensus in the field of comparative genocide studies on a definition of "genocide".[e]The following terminology has been used by individual authors to describe mass killings of unarmed civilians by communist governments, individually or as a whole:

The criticisms of some of the estimates were mostly focused on three aspects: (i) the estimates were based on sparse and incomplete data, when significant errors are inevitable,[34][35][16](ii) some critics said the figures were skewed to higher possible values,[36][w][34]and (iii) some critics argued that victims of Holodomor and other man-made famines created by communist governments should not be counted.[37][34][38]

Klas-Göran Karlsson writes that "Ideologies are systems of ideas, which cannot commit crimes independently. However, individuals, collectives and states that have defined themselves as communist have committed crimes in the name of communist ideology, or without naming communism as the direct source of motivation for their crimes."[39]Scholars such as R. J. Rummel, Daniel Goldhagen,[40]Richard Pipes,[41] and John N. Gray[42]consider communism as a significant causative factor in mass killings.[43][44]The Black Book of Communismclaims an association between communism and criminality—"Communist regimes ... turned mass crime into a full-blown system of government"[45]—and says that this criminality lies at the level of ideology rather than state practice.[46] 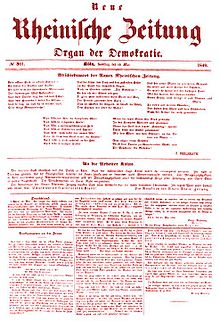 The last issue of Karl Marx's journal Neue Rheinische Zeitung, from May 19, 1849, printed in red ink.

Christopher J. Finlay has argued that Marxism legitimates violence, without any clear limiting principle, because it rejects moral and ethical norms as constructs of the dominant class and "states that it would be conceivable for revolutionaries to commit atrocious crimes in bringing about a socialist system, with the belief that their crimes will be retroactively absolved by the new system of ethics put in place by the proletariat."[x]Rustam Singhnotes that Marx had alluded to the possibility of peaceful revolution but, after the failed Revolutions of 1848, he emphasized the need for violent revolution and "revolutionary terror".[y]

Literary historian George G. Watson cited an 1849 article written by Friedrich Engelscalled "The Hungarian Struggle" and published in Marx's journal Neue Rheinische Zeitung, stating that the writings of Engels and others show that "the Marxist theory of historyrequired and demanded genocide for reasons implicit in its claim that feudalism, which in advanced nations was already giving place to capitalism, must in its turn be superseded by socialism. Entire nations would be left behind after a workers' revolution, feudal remnants in a socialist age, and since they could not advance two steps at a time, they would have to be killed. They were racial trash, as Engels called them, and fit only for the dung-heap of history."[47][z]Watson's claims have been criticized by Robert Grant for "dubious evidence", arguing that "what Marx and Engels are calling for is ... at the very least a kind of cultural genocide; but it is not obvious, at least from Watson's citations, that actual mass killing, rather

https://en.wikipedia.org/wiki/Mass_killings_under_communist_regimes
Posted by none at Thursday, January 10, 2019