Global Communism, Dow Drops 390 Points and Even Some Pessimists Are Surprised the ‘Panic’ - Barron's

Democrats taking over the house.
Liberals and socialists everywhere.
Facebook and Russians monitoring your every move.
Food and Drugs from Communist China who wants you dead.
USA losing freedom, becoming a vassal state to the globalists.
Economy in a slow collapse for a long time cannot service mountain of exploding debts.
Stock market consisting of ad track stalk junk disinformation companies FANG Facebook Amazon Netflix Google
Eventually investors will figure out the stock market is worthless and crash in the evaporating economy.
China may lose on USA Treasury Bonds, get zero return of their money,
but will takeover the 50 states as they have already colonized Africa and re-instituted slavery perfecting the fine art of slavery.
Chinese already the silent majority in many professions, hospitals, universities, behind the scenes.
Communists will leave talking heads in Washington DC TV radio to tell the sheeple that everything is ok.
Become transgender, overdose on drugs, sick from smog, addicted to sugar, electronics, deep in debt hounded by debt collectors, etc.
While communist China takes over and eliminates competition.
If you are not useful to the regime you will be beheaded and organs harvested for those in need.
Better get an education or useful skill ASAP.
Send all Chinese back to China.
Send all Russians back to Russia.
Send all Muslims back to Mecca.
Cut off all wires to those countries so they cannot hack us.
Ban travel to those countries,
Ban trade with those countries.
Suspend all flights,
Close the ports and ban all boats from those countries.
etc.
USA should become self-sufficient again.
Make our own clothes, phones, foods, drugs, etc.
Dow Drops 390 Points and Even Some Pessimists Are Surprised the 'Panic' 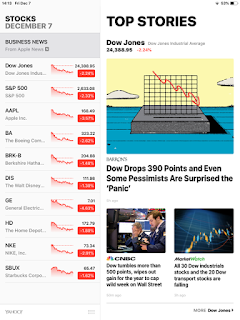