Fwd: Victory FOR THE PEOPLE in Paris (and it's only Tuesday) MACRON blinks....Setback for the NWO, rich Globalist/Socialist Rulers, the ‘Deep State’

Victory FOR THE PEOPLE in Paris (and it's only Tuesday) MACRON blinks....Setback for the NWO, rich Globalist/Socialist Rulers, the 'Deep State' 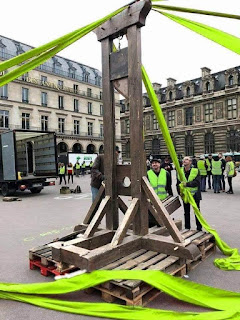 After a guillotine was rolled out, [we mean business] Macron [The STATE for the Rich] surrendered to the people's demands. Police swung over [to the people] in solidarity last night.
Lothar
http://www.antiwar.com/
On Dec 4, 2018, at 07:43, Bob  wrote:

Paris... City of Lights. Lit cars...lit buildings...lit businesses...even 2 banks. THAT got attention. Bankers called Macron and he got the message. No more regressive taxes… for now. I didn't expect this much "spine" from the French in winter.

I thought it would end like Occupy Wall Street.  In Belgium there were Flemish nationalists protesting alongside French socialists - groups that normally get along like Jews and Palestinians. People were there for reasons ranging from high gas prices to immigration. A model for Californians suffering from the same (regressive dual fuel) taxation.

Macron suspended the fuel tax, same as Nixon "suspended" the gold standard in 1971.

With his popularity rating at record lows (recent polls put it at around 26%, on par with Hollande), his capital city burning and the populists he defeated during his stunning electoral victory last year making serious electoral inroads, French President Emmanuel Macron finally caved, and on Tuesday ordered a six month suspension of planned 'fuel taxes' which spurred widespread and destructive protests across France over the past three weeks.

After reportedly weighing declaring a state of emergency that would have cleared the way for an unprecedented crackdown on dissent, Macron decided that such measures would only intensify the popular opposition to his government. And according to Reuters, Prime Minister Edouard Philippe has declared a suspension of the staggeringly unpopular tax.

"No tax deserves to endanger the security of the nation," Philippe said in a televised address, who on Monday held separate meetings with opposition party leaders, in which they demanded the scrapping of the planned increase in fuel taxes. The same day striking students closed down 100 high schools and rising fuel shortages were reported in some parts of the country.

A freeze of planned fuel tax increases was one of a number of measures called for in an editorial by 10 self-proclaimed gilets jaunes representatives published on Sunday in the Le Journal du Dimanche newspaper. They also demanded the holding of countrywide consultations over taxes.

The decision marked the first time that Macron has backed down from implementing an unpopular policy in his 18-month presidency as a result of the furious public response, and is set to unleash even more protests as the emboldened French people now realize that taking to the streets will results in success.

The suspension has come in the form of a "time limited moratorium". Though a permanent suspension remains a possibility (particularly since demonstrators are already planning another round of violent rallies where 120,000 protesters were expected to try and reenact the storming of the Bastille). But there's a catch: If taxes must be cut, then public spending will also be scaled back, Macron said; in other words once the smoke clears the anger will be even greater as social welfare programs are slashed.

The "yellow vest" movement - which kicked off with paralyzing protests on Nov. 17 as word of the protests spread on social media - has won a crucial victory in its attempt to force Macron to reverse a policy that many have decried for squeezing household spending at a time when France's economy (and indeed economies throughout Western Europe) is struggling with tepid growth. The protests have even had a negative impact French shares.

The movement was named for the highly visible "yellow vests" that all French motorists are required to store in their cars. Macron justified the gas tax by saying it was essential for combating climate change. But his decision to suspend the tax marks a deeply embarrassing moment for the president, who is in Poland this week to discuss actions to combat climate change with other European leaders.

Meanwhile, amid the pervasive dissatisfaction with Macron and his policies, the fuel tax protests morphed into a broader anti-Macron movement, as the French people have criticized him for policies that they believe favor the rich over the working and middle-class.

Already, a handful of deaths have occurred during protests over the past few weekends, further stoking the public's anger. Acts of violence were widespread during the latest rally, as the Arc de Triomphe was defaced and roads off the Champs Elysees were damaged. The demonstrations have reportedly hurt retail spending and damaged the French economy during a holiday season that many retailers had been depending on to help push them into the black.

Macron successfully marketed himself as a pragmatic centrist during the 2017 French election. But a series of gaffes, scandals and policy missteps have helped him earn a reputation as the "President of the Rich" (before serving as president, Macron was a former economy minister and investment banker). To help combat this negative perception ahead of European Elections next year, Macron said he's considering other "populist" policies like raising the minimum wage.

While it wasn't immediately clear if Macron's decision to suspend the tax would be enough to placate the seething anger of the French people - and it is safe to say his caving has merely emboldened the French to demand even more - but party officials have cautioned that he might need to back down on other policy "reforms" like cutting pension benefits.

In short order he made changes to the labour code to make hiring and firing easier, he took on the rail unions by forcing through changes to the national rail company, and he cut wealth taxes in a bid to stimulate investment.

However, in the process he earned the tag "president of the rich" for seeming to do more to court big business and ease the tax burden on the wealthy. Discontent has steadily risen among blue-collar workers and the middle-class struggling to make ends meet.

The government's decision to push ahead with an increase in fuel taxes from January, part of a longer-term effort to discourage fossil fuel use, angered people in rural or outer urban areas who use their cars more.

It was not immediately clear if suspending the tax rise would be enough to placate the "yellow vests" or head off a repeat of the violence that erupted in Paris on Saturday, which officials said was driven by extreme groups on the far-left and far-right, such as the Black bloc and anarchist factions.

Recent polls have shown that most of France supports the cause of the yellow vests. Similar protests have broken out around Europe, spreading to Belgium, Italy and the Netherlands.

Meanwhile, more protests are scheduled: Christophe Castaner, the French interior minister, said on Sunday that measures under consideration by the government include the imposition of a state of emergency and the deployment of soldiers to help contain the next protests, which are scheduled for Saturday.